Friday morning, I dragged myself out of bed still half asleep at 5:25 am. I was supposed to meet Wayne and Pam in Walhalla at seven, but first, I needed to brush, shave, dress and make final preparations for our hike.

Today we would be hiking on a wooded trail that follows the NC/SC state line from the top of Sassafras Mountain to Caesars Head State Park, 14.2 miles away.

Before we could begin our hike though, we would have to drive on steep and winding mountain roads to shuttle our vehicles. It was 9:30 by the time that we finally arrived at the parking lot near the summit of Sassafras and donned our packs.

At 3,553 feet, Sassafras Mountain is the highest point in South Carolina. The trees at the top have been cleared to make way for the construction of a picnic shelter, several viewing platforms and a central tower that will offer visitors panoramic views of four states and of the Eastern Continental Divide.

Our hike started with an immediate descent of 643 feet down to Sassafras Gap. There we crossed the old abandoned Emory Gap Toll Road before beginning a steep ascent of Whiteoak Mountain. I’m normally a strong hiker, but I found myself struggling on this initial climb. I had caught a cold from my sons and now I was feeling pretty sick. It probably would have been wise for me to have stayed home in bed in order to recuperate, but alas, I don’t have that much good sense (Just ask my wife). Besides, I would have hated to have missed this opportunity to get out and hike.

After hiking four miles, we reached a boggy area and then began another steep ascent. This climb was basically straight up the slope of the hill, without any switchbacks. I think that it was Pam that joked that they must have gotten tired of making trail.

At mile 5.3 we emerged from the woods and turned sharply right where the trail joined a roadbed, then we hiked another tenth of a mile until we came to a rock overlook. From the overlook we had very nice views of the mountains across the valley in the vicinity of the East Fork of the French Broad River. 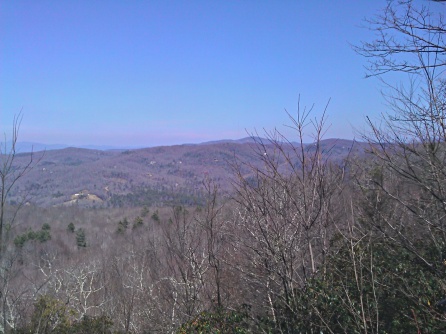 Another view of the area of the French Broad River

Before continuing on, we discussed lunch and decided that we would wait till we got to an area with large boulders at mile 6.7. Pam figured that the boulders might offer a good place to sit and eat. Well, the boulders were big as houses, so we kept on hiking until we came to a small campsite.

Speaking of camping, about three years ago, several of us from the Oconee County Hiking Club, together with Ron and Sean, from the Anderson Club did this same section as an overnighter. Back then, we had set up camp around mile eight in the only semi-level area that we could find. Our camp was carpeted with wet leaves and inhabited by probably hundreds of spiders. I had left my tent flap unzipped for a few minutes and a half-dozen spiders got inside. We struggled to get a small fire going, then sat around warming ourselves and chatting before calling it a night and climbing into our sleeping bags.

What’s the name of this ground cover?

This was a nice wooded trail

Back to today’s hike, Wayne, Pam and I, spent about 20 minutes eating our lunches and then resumed hiking. Not long after resuming, Pam slipped on a rock and fell, landing hard on her right elbow and right hip. She took a moment to assess herself and then stood up. When we were certain that she was okay, and in the spirit of the coming Summer Olympics, I told her that I gave her fall an eight for technical difficulty and a nine for artistic impression. I think that she was pleased with that score.

At mile 9.3 we reached Gum Gap and the access for the Matthews Creek Heritage Preserve. Later, we crossed Matthews Creek on boulders. All the boulders were submerged under a couple of inches of water, which made our crossing a little tricky. Wayne had his camera ready to photograph Pam or I in case we took a plunge, but we managed to get to the other side without going for a swim (Sorry Wayne, maybe next time).

For most of our hike, we hadn’t seen anybody else, however when we were nearing the end, a young woman (probably in her early 20’s), and her male companion, approached us from the opposite direction. They were looking for the trail that would take them to the suspension bridge over Raven Cliff Falls, and weren’t sure if they had passed it. Pam checked her notes and determined that they needed to turn around and go back almost a mile. Now, although this section was mostly uphill and even though Wayne, Pam and I, had already been hiking for several hours, the three of us kicked it into overdrive and flew up the trail ahead of the young couple. Once they made it to their junction and we said goodbye and parted ways, I half-jokingly said to Pam, “now that we’ve shown up those whippersnappers, can we slow down?” Wayne offered a sly smile and Pam turned to me and admitted that there had been no way that she was going to let anybody pass her. What can I say, sometimes we’re a little competitive!

Pam mentioned that the young woman had said that she was a nurse at a hospital in Spartanburg, SC. I had two surgeries last year, the first one taking place at a hospital in Oconee County on Super Bowl Sunday, when the Patriots beat Seattle. Thinking about it now, the young woman reminds me very much of one of my nurses. Could it really have been her? It’s two different facilities, but maybe she relocated during the last year. If we had gotten her name, I’d know for sure. I’ve had other seemingly unlikely encounters while hiking. Just a few weeks ago, several of us had gone to Panthertown Valley in NC. Panthertown is comprised of more than 10,000 acres of protected public land with thirty miles of marked trails and hundreds of miles of unmarked trails. I hadn’t been there in a couple of years. While we were hiking, we ran into the Principle and his wife from the high school that my daughter and oldest son attend. They were all geared up for the cold weather so I hadn’t known it was them until Wayne told me. We had just happened to be on the same trail, and on the same day.

As for this hike, by the time that we reached our vehicle, we had logged a total of 14.86 miles, climbed close to 3,000 feet, and descended a little more than 3,200 feet. Instead of driving directly back to the beginning to get our other vehicle, we drove to the Fred W. Symmes Chapel at the YMCA – Camp Greenville.

Pam taking it in

Paris Mountain and Greenville SC way in the distance 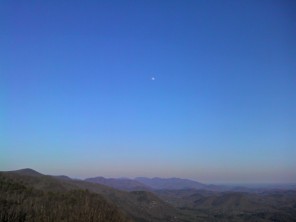 A look up into the rafters

The chapel is commonly referred to as “Pretty Place” because of its amazing views, and is popular for weddings. Wayne and Pam had been here before but this was my first visit. I’ll definitely have to come back and bring my wife and kids.