This past Tuesday, I went hiking with Pam and Betty, from the Oconee County Hiking Club, and with three members from the Georgia group. After meeting Pam bright and early at the Ingles in Westminster, the two of us drove together to Clayton, Georgia where we were joined by Betty and the others. From there, the six of us headed towards Franklin, North Carolina and to our trailhead at the Standing Indian Campground. The Standing Indian Campground lies within the Nantahalla National Forest at the headwaters of the Nantahalla River. It is surrounded by mountain peaks that are in excess of 5,000 feet, and has numerous campsites, trout streams, and hiking trails. 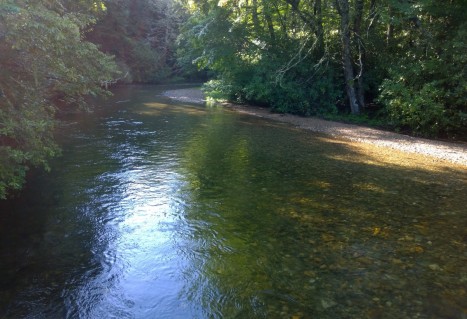 A view of the Nantahala River, which we crossed at the beginning and the end of our hike. 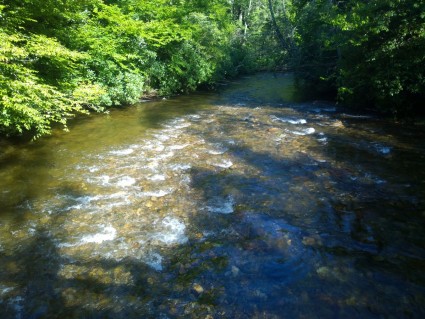 Another view. Years ago, my wife Joann and I went whitewater rafting down a different stretch of the Nantahalla.

My friend and frequent hiking companion, Wayne, did not hike with us on this particular day. Wayne is, in fact, still attempting to thru-hike the Appalachian Trail. Wayne began his thru-hike in March, northbound from the top of Springer Mountain. In July, he flip-flopped and began heading South from Mt. Katahdin. Recently, an unforseen and severe case of Vertigo caused him to collapse on trail. He’s currently at a hotel in Skowhegan, Maine recuperating. Wayne is tough as nails though and is as determined as ever to complete his journey. If anyone can do it, he can.

After gearing up, we started our hike on the Kimsey Creek Trail. The trail stayed close to the creek for much of the way and crossed it a number of times. Although the crossings were done mostly on wooden footbridges, we did have to rock hop across several smaller feeder streams. Fortunately, we were able to keep our feet and shoes still mostly dry.

Eventually, the trail began to climb up away from the creek, towards Deep Gap and the junction for the Appalachian Trail. At one point, we popped out of the woods and unto a gravel road. At first, we weren’t sure which way we needed to go to continue on the trail. After checking our maps, we saw that the road would take us to the gap, so we ended up following that. Along the road, we stopped to look at our maps once again. While we were able to figure out where we needed to have gone, none of us felt much like backtracking. 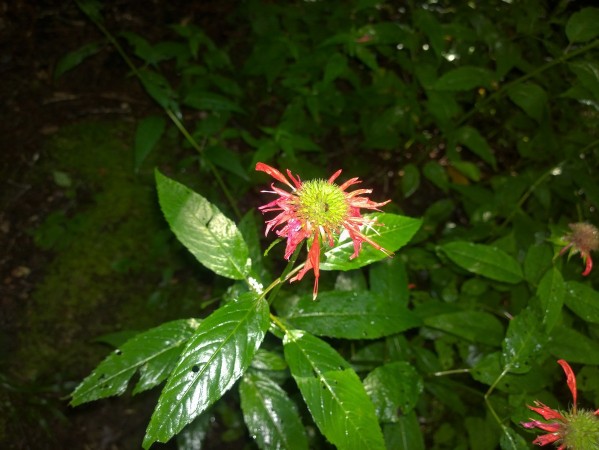 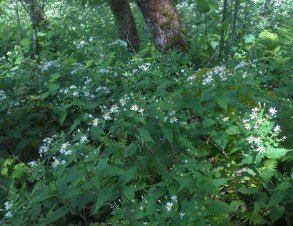 By the time that we had reached Deep Gap, we had hiked about 4.4 miles or so from the trailhead. While the others stood and chatted, I found a place to sit and took a short break. Afterwards, we headed North on the Appalachian Trail towards the Standing Indian Shelter, which would serve as our lunch spot for the day. At the shelter, we saw that someone had nailed the skin from a Timber Rattlesnake to the exterior. I’m not sure why it didn’t occur to me to take a picture, but it didn’t. I did, however, think to touch it figuring that I probably wouldn’t get another such opportunity. While we ate our lunches, I thumbed through the logbook to see if I could find the names of any of this year’s thru-hikers that I know, such as Defib (that’s Wayne), No Name, Silver, Sunshine, or Spoons (formerly Bear Bait). I didn’t find their names but I did get word recently that Spoons summited Katahdin. WAY TO GO, SPOONS!!! 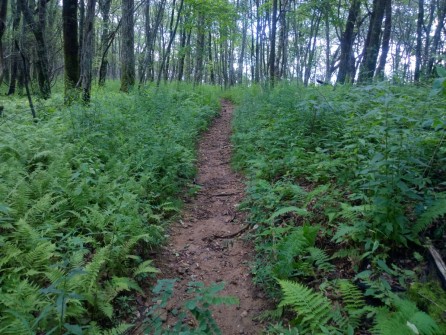 Here, the trail passed through some ferns. 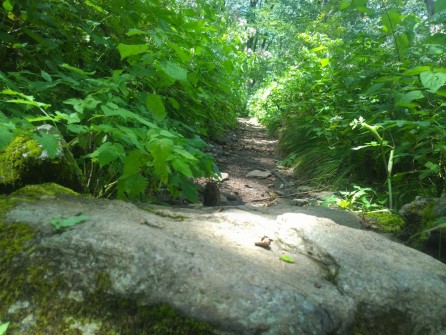 A shot of the trail from just above the tread.

When we finished eating, we put our packs back on and continued to climb towards the summit of Standing Indian, which was still about 1.6 miles further up the trail and about 700 feet higher. When we reached the summit, we took some pictures and spent a few minutes enjoying the views, which were pretty great. Laid out before us was a sea of lushly forested mountains that appeared to go on and on, endlessly.

For the hike back, we followed the Lower Ridge Trail. The Lower Ridge Trail is steep, rocky, very overgrown, and is apparently seldom used. The brush, in places, was at least shoulder height and was so dense that you could not see the tread. I used my hiking poles to push the brush aside so that I could try to find the way down. Eventually, of course, we did make it back to our waiting vehicles.

In all, we had hiked 12.1 miles. Our total vertical elevation gain/loss was 4,960 feet, including close to 2,500 feet of climbing. I would rate this loop as being somewhere between moderately-strenuous and strenuous.

There are many other good trails within the Standing Indian Campground that I haven’t yet done, so I’ll most likely be going back. If you like hiking and if you’re ever in the area, you should definitely check it out for yourself. Thanks for reading.